IT Security is mainly focused on IT devices it could be either servers, storage, networking devices.

IT Security is focused on complying to the policies that Information Security has created.

It is only defensive security such as Anti-virus, Firewall, IPS so on & so forth. It involves with mostly operational of Defense-in-depth (DiD).

Information Technology or InfoTech or IT is driven by the top management or leadership team.

Information Security is mainly focused upon ensuring the protection of information across entire organization.

IT is a subset of Information Security.

Vulnerability Assessment – Analysing Vulnerabilities to notify the IT Team to fix them. VA is the key focus in the industry to notify the gaps in the IT infrastructure much before it gets into the hands of malicious hackers.

Penetration Testing – is simulating the way malicious hackers do but without causing any harm to the information. However, PenTest is more focussed and effective in analyzing & resolving the vulnerabilities. It considers the aspects of human element – the art of deception or social engineering as well.

PT is very much like a military operation. However, generally it is performed on the organizations after receiving proper approval from the CISO (Chief Information Security Officer) and usually PT Team will be headed by CPT (Chief Penetration Tester)

The Significance of Namaste in Information Security

The Significance of Namaste or Namaskara in Information Security The “divine in me honours the divine in you”. Personal Branding… 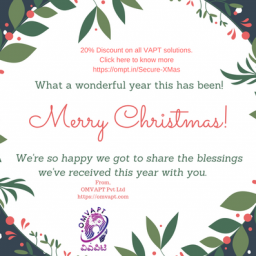 20% Discount on all our VAPT offerings for Merry XMas

Namaskara Folks, We are offering 20% flat discounts on all our solution offerings. Vulnerability Assessment  (VA) – We perform for…